Home News Dr Richard Gibbs Writes to XGS Families
  
By Greg Wilkinson News
DR. rICHARD GIBBS writes TO XGS FAMILIES
Dear Xia-Gibbs Syndrome families,
It is hard to believe that a whole year has passed since the last XGS Awareness Week. I think an adaptation of the old saying is that ‘may you not live in interesting times’. Well, here we are, in the most interesting of times! On behalf of all of my colleagues here at the Human Genome Sequencing Center (HGSC) at Baylor College of Medicine, we wish you all well and hope that things have been as good as they can be during this last, difficult year. 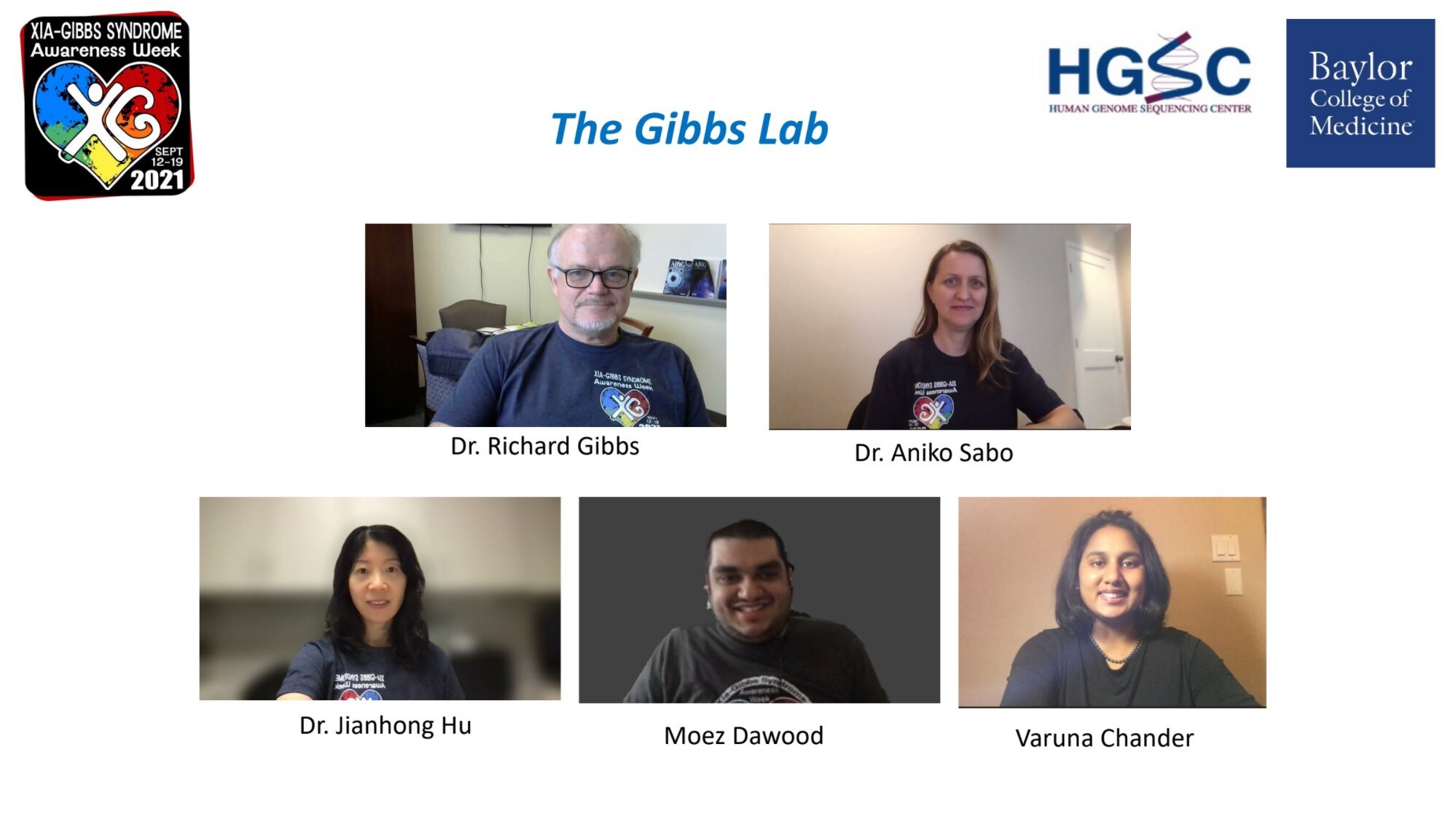 Throughout 2021, the HGSC has pressed on with XGS research and we remain committed to the long-term goal of first understanding the complete molecular basis of XGS and through that, reaching for what will one day be a cure. The work has progressed mostly through the analysis of data in the Baylor College of Medicine Xia-Gibbs Registry (‘XGS Registry’). There has been substantial progress.

The XGS Registry itself has grown to almost 100 individuals, who have shared their data. There are more than 300 families who are now known to us worldwide, when we count all those we see on Facebook or through other communications. This means that for around 200 families, we do not have detailed Registry records. We are more than aware that some of the reason for the difference between the total number of families and the number of individuals in the XGS Registry is because of the mechanical difficulty of actually filling in forms and becoming properly logged in. Historically, this has been because that in order to maintain very secure data boundaries and to satisfy our local compliance requirements we have used somewhat cumbersome, specialized software to manage all the records. I am happy to say that we are advancing the technology so that it will very soon become more user-friendly to log into the XGS Registry and to enter data. We hope that with these changes, others will be willing to share their data in this secure environment. This work has been supported in part by Xia-Gibbs Society, to whom we are extremely grateful.

Earlier this year, we were able to publish the results of a study led by Michael Khayat with considerable input from Jianhong Hu and other colleagues(16). That paper, entitled ‘Phenotypic and protein localization heterogeneity associated with AHDC1 pathogenic protein truncating alleles in Xia-Gibbs Syndrome’, reported the first insight that we had into the molecular consequences of mutations being in different positions in the protein AHDC1.

We found two things: First that there was a propensity for some features of the clinical presentation to be more likely depending on whether the mutation position was close to one end of the protein. Most significantly we found there was also a cellular effect of the mutational position. The effect was a different perturbation of the cell sub-organelle called the nucleolus. Different mutation positions resulted in different changes. We are excited by this finding although we emphasize that there are many steps between such an observation in a cellular system in the laboratory, versus what that can mean in a real person and of course what can eventually mean for properly understanding the disease.

In another study, ‘AHDC1 missense mutations in Xia-Gibbs Syndrome’, just now online and soon to be published in Human Genetics and Genomics Advances, the same team evaluated reports of more mild mutations in the AHDC1 protein, that might lead to XGS. There are ten such examples known to us and they are evaluated in the manuscript . An important finding of that study is that there are some critical regions of the protein that are more sensitive to these subtle mutations, than are other regions of the protein. This is both useful for molecular diagnostics and also gives us new insight into the protein function.

A third study is now being written up by Varuna Chandra. Varuna has been studying the effect of genomic DNA deletions of AHDC1 and their propensity to lead to XGS. This is a complicated question because there are other genes in the region that are physically close to AHDC1 in the
genome and in most individuals with deletions of AHDC1, the other genes are also involved. As a consequence, we can’t easily tell what is causing the clinical symptoms in these individuals. In her work, Varuna has made some ground-breaking observations as to what controls the normal
expression of ADHC1. We look forward to describing this in more details soon.

One good way to monitor progress of research into XGS is to go to the national site that catalogs all research papers into a search engine – PubMed at the National Library of Medicine. To date, there have been nearly 30 manuscripts published from 2014 where there was just one paper and so we have seen a steady growth to this year, with nine already in 2021.

Our earnest wish is to see more and more XGS research in different labs around the world. There will be an increase happen naturally overtime, but of course we want to accelerate it. A good trend is that the emerging publications reflect both case reports and advances in the understanding of the basic molecular biology of XGS. Among the case reports, some focus on aspects of the XGS individuals who are more mildly affected (see for example this paper, or this one). As you all know, a hallmark of XGS is the general clinical heterogeneity. In these publications, in the social media platforms and in the discussions that we have had privately, there has been a growing interest in this issue. It asks the important question of ‘which aspects of the clinical presentation can be expected to become more mild or can be ameliorated by intervention’? This is now a big focus of the research community.

A second topic that has emerged recently in group discussions concerns behavioral issues. As the XGS population goes through adolescence and as more individuals join the collective discussion, these issues have been more prominent. In the very early stages of XGS studies there were reports of some ‘aggressive’ behavior but ready recognition that there was little understanding of the difference between ‘aggressive behavior’ and ‘self injurious behavior’. At the same time there were several reports of clearly ‘self injurious’ behavior – particularly headbanging, reported by some parents.

At this time, it is difficult to make conclusive statements about any of the above. However, the good news is that the burgeoning XGS Registry and an expansion of its capabilities to properly ascertain the spectrum of behavioral patterns promises to give real clarity in this area.

As we enter XGS Awareness Week, we want to add to our usual message of goodwill to all the XGS families. The addition is to other researchers in neurology and genetics. It is a ‘thank you’ to those of you who have dedicated some of your research time to studying this important health
problem. For those others of you who see this message who are considering working on XGS, please do not hesitate to reach out to us to share any resources that may assist you.

Wishing all well and hoping for a face-to-face, as soon as this pandemic goes away.

Richard Gibbs and all at the HGSC.